Skip to content
We, at Cardz for Kidz!, were having a quick debate with a mutual friend about who is the all-time greatest superhero; said friend passionately argued that it was Superman/Clark Kent. But based on the movie collections of some of us, we’re leaning more towards one of the X-Men, like Professor Xavier. 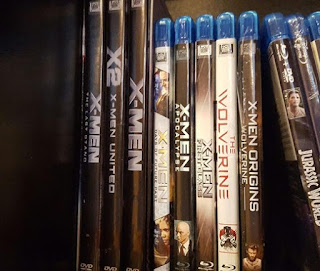 However, Superman is a pretty good choice, especially for this blog post. With this we looked into Superman’s powers and we saw that they’re solar flare and heat vision, super longevity, solar invulnerability, strength and endurance, speed and reflexes, intelligence, senses and many more. With all those powers, we know that Superman can make a difference.
Now why did we mention all of this? Although we can’t call her “Clark Kent,” we now have our very own Superwoman: Sherry Green! As first listed in the Help Wantedblog post (OR if you check out the delivery by year section on our website), you’ll notice we’ve been growing recently. In that blog post, we asked for people to step up and help in a couple ways. One area we wanted more help with—the Advisory Board to get more vital input and responses when we send out our quarterly summaries. 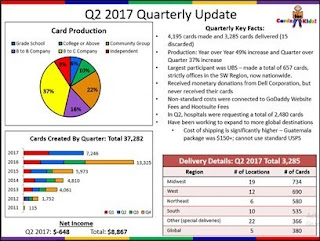 Then another (and often more important) way, is we needed volunteers to help with some of the day-to-day work. That ranged from counting the thousands of cards to putting stickers on the back so the recipients know where they came from.
As you can see from the pictures below, Sherry stepped up and volunteered HOURS of time (behind the scenes) to simply do the grunt work. 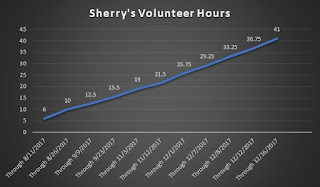 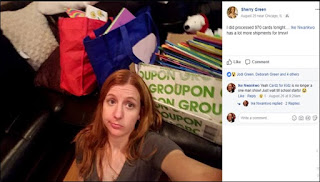 If that wasn’t enough, our superhero connected us with her sister, Jodi, who had her students design some of our blank cards and write Spanish phrases in them. Thanks to Jodi’s students, we were able to send cards to our children in Mexico City for the first time in over 6 months. AND: Sherry also brought a friend, Lex – who now volunteers, to the Pledge Allegiance card-making event, who ended up making one of the OVERALL Top 10 cards in Q3 2017! 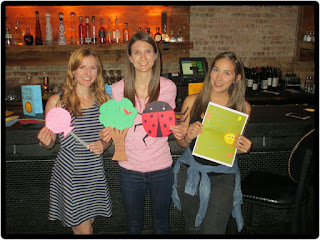 OK, we understand there are some people who may still think, “That’s not enough.” We’re not quite sure how that couldn’t be, but maybe they’re thinking of Diane, who’s made of total of 917 cards—in both English andSpanish. We’ll be forever grateful. Or maybe they’re thinking of Shante, who started things at Huron Consulting Group and has helped Huron get offices across the country involved. That’s VERY impressive. But we must remind you, not only does Sherry help with the behind the scenes work that we mentioned above—counting the thousands of cards and placing stickers on them—she also stepped up when we weren’t able to get a hold of some of the top artists and attended the Cardz WITH Kidz event! As you can see in the following pictures, she made sure the children had a great time, doing all types of things ranging from making necklaces to playing Connect 4. 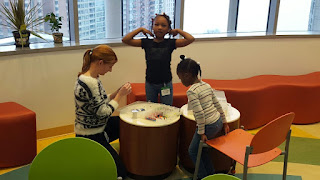 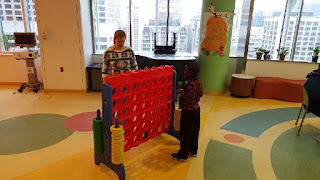 On top of that, she’s already proudly claiming loyalty to our organization on social media rather than simply stating it’s something she does on the side and volunteered at some events. 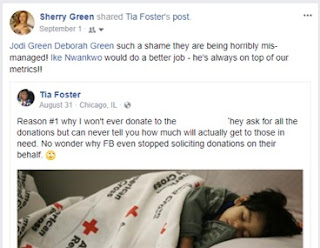 With all that in mind, there may be a debate as to who is the overall top superhero. You’ll have some people who favor DC Comics and others who favor Marvel. In our opinion, based on the tough spot we were in when we began to ask for help—and how Sherry stepped up, she’s definitely a superhero in our books. The only thing she’s missing is her FLYING CAPE because everything else is set! 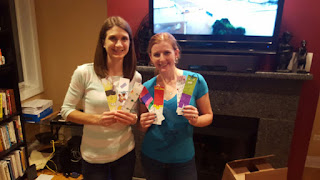 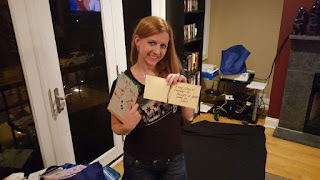