Skip to content
Some more honesty. As discussed in a prior post, some of the original Cardz for Kidz! members have marketing degrees. Now, here’s something we learned in one of our classes. There are primarily 3 different types of marketing campaigns. First, there are some campaigns that try to increase AWARENESS – simply get more people to know your brand/product. Others that are TRANSACTIONAL or action based – trying to drive action ranging from purchasing a product to downloading new software. Finally, there are some campaigns that are referred to as LOYALTY campaigns. These initiatives are dedicated to strengthening the connection between consumers and a brand. Originally, when we officially became Cardz for Kidz!, we were strictly focused on the last two initiatives – trying to get new groups to host events and retain groups who have participated in the past.
If you need confirmation, just check out the website and you’ll see our order:

For the ‘Loyalty’ part we made sure that the Participants tab was one of the first section anyone sees. We’re using the second meaning of one of our main hashtags, #EveryCardCounts[1]. We figured this way groups know they’re being recognized and other people can see how many cards they have created. We thought this might increase competition between groups and they may be interested in continually making more cards – seeing their numbers rise. Also, we thought this would be a way to get more groups to Stream It[2].
Next for the ‘Transactional’ part, we made sure that EVERYTHING anyone would need to start an event is on our site. If you check out the How Topage, you’ll see a lot of information and the exact steps you need to do in order to host an event. This ranges from how to set up an event, where to send the cards, and where to send pictures. And since we wanted to make things even more efficient, we have files people can view or download that show what art supplies you need, little signs that can be placed on the tables, as well as PowerPoint that can be played in the background.
Based on missing our 2015 goals, we have modified our approach. Originally, we thought simply having more people know about our organization was not helping disheartened children at all. Although it may be impressive if we had 10,000+ fans, that would not mean we would consistently have 10,000+ cards. After things fell through and we weren’t able to meet our 2015 goal, we had to stick to our promise and tell personal stories to get more people to the website and to start telling others. Although this wouldn’t necessarily get more cards, we’re hoping that more people would begin to talk. Also, we have reached out to a couple different newspapers and stations to try to improve awareness that way. In addition to that, we got small stickers that can be placed on the back of cards. 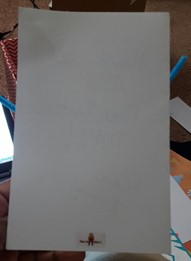 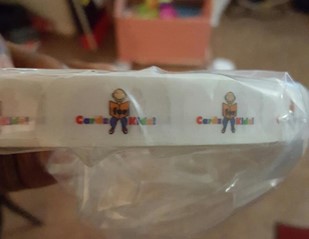 Some members of the board have been recommending this for a while, but what actually led to the follow-through was an incident at Lurie Children’s Hospital. When we handed a card to a child, their mother asked where they were from. We started to explain and she followed by saying, it’d be nice if it said it somewhere. That request finally got us going, we got the stickers and have also been asking the different leaders for each group to have all their participants not only sign their name, but add their city and/or group as well. It’s a bit hard to see on the actual cards, but Girl Scouts Troop 13 did a wonderful job since a lot of the girls wrote names, group, cities AND troop number! Thankfully, they added all of that without interrupting the layout of the cards. 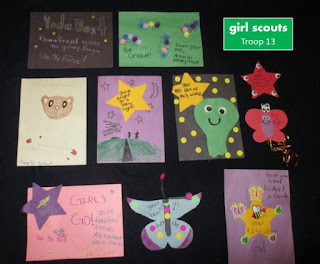 If it all works out, the families who receive the cards will now know, or be more aware, of where their cards are coming from. We’re hoping that everyone’s INCREASED AWARENESSand our consistent gratitude inspires more groups to either start hosting events or continually participate in uplifting spirits.
#IncreasedAwareness #UpliftingSpirits
To see more pictures and stories please check out our website www.cardzforkidz.org, like us on Facebook, follow us on Twitter, visit our Google+ page, and/or visit our LinkedInpage! Also, check out a couple videos on YouTube!
[1]First part is since each card is delivered room to room a child will receive each card, so every card counts.
[2] Independently host Cardz for Kidz! events without any member of the organization checking in to see if they are still interested and/or requesting cards for a special event.
Download Best WordPress Themes Free Download
Download Nulled WordPress Themes
Download Premium WordPress Themes Free
Download Nulled WordPress Themes
udemy paid course free download
download lenevo firmware
Download Nulled WordPress Themes
download udemy paid course for free

One thought on “Increased Awareness”