Skip to content
Have you ever had or heard of conversations like that? Actually we were googling that quote and were reminded that there’s a movie with a similar title!! Now what does men approaching women have to do with people making cards for disheartened children? Well, it’s not exactly how we’re connecting with the kids, but more how we’ve connected with our NUMBER ONE contributor, Capital One.
It’s interesting because recently we’ve seen a lot of their commercials on television and we know they’re pretty well-known (#whatsinyourwallet). We thought it’d be great if we were able to get them to join in, but weren’t sure how to approach. We figured they were out of our league since we didn’t have many direct contacts like we did with some of the other large companies we’ve worked with such as Google, LinkedIn and QuickenLoans. Still to this day, we recall being extremely excited/shocked when we got the first email from William in Virgina with some pictures of the cards and even a picture of their “top cards.” 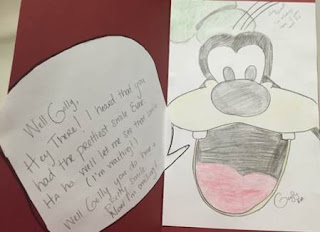 For some inside information, we always say, “Every Card Counts,” and yes that’s definitely true. We know where each card is coming from whether that’s the 36 cards that came from our friends at Burtch Works OR the thousands that came from Capital One, they’re all important. One difference is that when  more renowned companies join in, we’re able to say, “groups such as Capital One and Google have all joined in to help us reach over 30,000 kids.” People on the phone or in emails are immediately impressed. So not only are their cards reaching kids, but the company’s prominence is helping us in other ways as well.
Then, if you look at the majority of the large companies we partner with, it’s oftenan individual office or maybe a specific region that’s joining in. With Capital One, it’s not just one! They’ve actually had at least 6 different offices join in and make at least 30 cards! Here’s proof:

That may continue to expand!
In addition, they’ve produced those cards so quickly. In Q4 2016 alone, they produced over 2,000 cards which meant that they moved up from being a Silver participant to Diamond participant overnight! 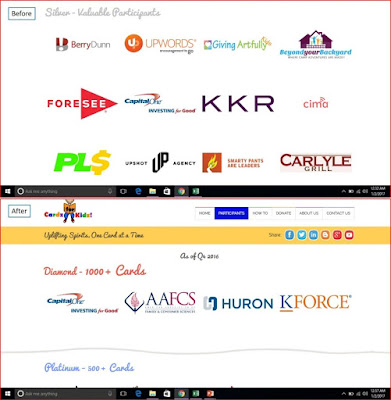 If you look closely you can see the time in the bottom right of both screens so you know those screenshots were taken back to back – literally overnight!
Finally, another impressive aspect is that they’ve had quantity and quality. If you look on our site you’ll see that Q4 2016 was by far our best quarter ever; we received twice as many cards as ever before. Even with that increased “competition”,  Capital One was able to get one of the OVERALL Top 10 cards(one of their Virginia offices made the Caterpillar card)! 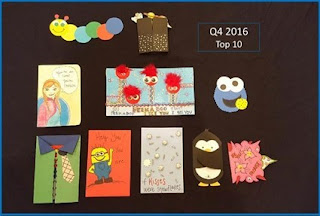 These days based on the advertising you may think of low rates, cash back, Jennifer Garner or Samuel L Jackson when you hear the name Capital One. Or maybe the sponsorships for large events ranging from the College Football Playoffs to the iHeart Radio Music Awards. But with us, we’ll just think about how this company is definitely INVESTING FOR GOOD and making a difference. And this small non-profit is thankful such a large company has taken the time to help us reach children and seniors in small places!