Skip to content
“Whoa!!!” *Heavy breathing and gasping for breath.* “I must be dreaming.” Our founder, Ike, sits up thinking to himself, “Where am I?”

He glances to the right and thinks to himself, “Okay, that looks right.” There’s the framed and signed newspaper article he received right before his surgery, #PieceofPaper. Right below that there’s the picture made by Paige, #AllDone that he used as encouragement throughout his most difficult times.* Sunsets, 2006 Coca Cola… Everything seems normal.
But the wild thoughts are still racing through his head, so he assumes he’s still dreaming. In that dream he saw the most surprising thing. It wasn’t negative necessarily, but just shocking. He saw The Capital One logo…everywhere. This renowned company was running engaging ads on TV. 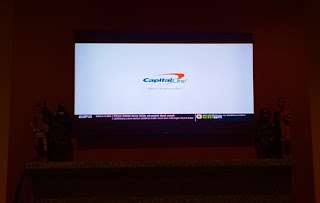 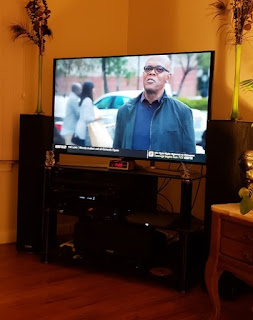 Then the next day, while getting off the train, he saw this company’s ads on a billboard. 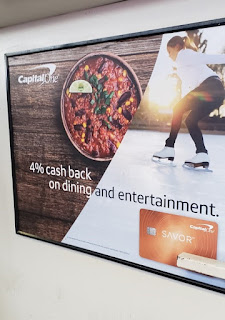 Then there were the effective letters in the mail addressed to Cardz for Kidz! 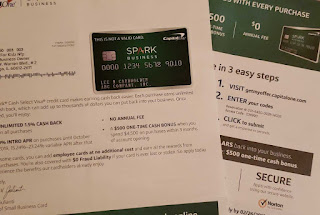 Coming from a marketing analytics background, this all seemed realistic. Reaching a target audieince with a strong frequency using a variety of media channels is familiar. The question would be though, how do you measure which media channel led to the conversion? But that’s another story.
The oddest part of the dream was that he dreamt Capital One was COMPLETELY involved in
Cardz for Kidz!. So yes, they’ve made cards for a few years in the past. For example, looking into 2017 as a whole, Capital One made a total of 1,725 cards. Then before that in Q4 2016, one quarter alone, they made a total of 2,076 and had a total of SIX different cities join in. It’s just… this dream was too good too be true. In order to provide more information on the dream, here’s what the chart on our donation page used to look like.

If you do the math for 2018, that’s 3 quarters where we average about 7,672 cards per quarter amongst all of our groups and independent artists from around the world.
Now back to this dream. Our founder was first tossing and turning because he was running out of space in the cherished Excel chart. He wanted to keep track of all the different Capital One locations who made cards, but he was running out of space and data was overlapping. It looked something like this. 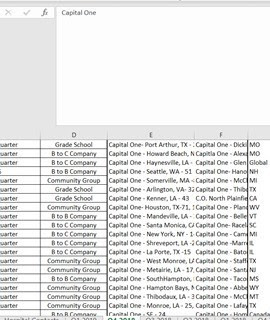 Wow. Something like receiving packages with addresses from 107 different cities. Maybe that’s believable and you don’t think anything special of it, but let’s add this. In that dream, this renowned company worked with all those different branches to make a total of 9,192 cards in a quarter. Capital One alone broke the record for our prior top cards per quarter by over 1,000 cards, (Q2 2018 – 8,078). They’ve been quality cards too! 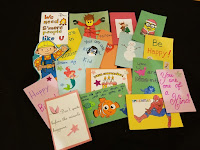 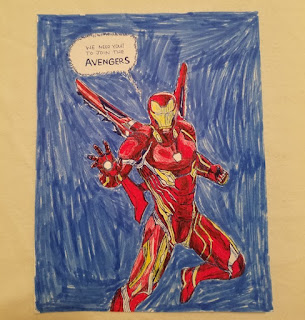 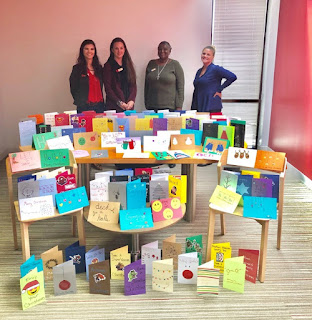 As of March 2019, Capital One is our top participating group and they’re leading by a long shot! 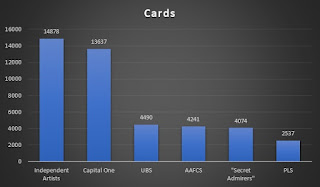 Some people may look at the chart and see that Capital One isn’t number one, but actually Capital Two. In our opinion that’s comparing them to families and artists from around the world who have been making cards for much longer. That includes Carmen in Taiwan, Karen in Australia, Diane and Karen in the USA and many more – #beyondthankful.
Now for people who follow our blog posts you know what we’re supposed to say. You know what’s missing. Here it is. It’s time. We need to be 100% Open and Honest. Cardz for Kidz! originally started off by strictly delivering cards to hospitals. From the beginning, we made it clear that we wanted to focus on small hospitals, #toosmallnosuchthing. Then we expanded past that and started to reach kids impacted by tragedies at school, #SandyHook. Those are situations people often hear about and are willing to make cards for. Next, when we began to expand, it was slightly bias and we looked into Ronald McDonald Houses since we believe it’s not only the children, but the families who are impacted as well, #familiestoo. What about the children who aren’t in a condition to rely on that type of support? Children who are either orphans, protected care and/or foster care? They could use some uplifting of spirits as well. With these locations it’s a bit hard to reach out and contact them directly when everyone has a 9-5 job, but thanks to Capital One’s increased card making in Q4 2018 we’ve been able to send over 1,000 cards to Ronald McDonald Houses around the world, as well as over 3,000 cards to different orphanages and foster homes across the country. There’s still time left, but so far in Q1 2019 here are new places that have agreed that they’d like to start receiving cards for their kids on a quartely basis based on these test shipments:
We’re sure the list will keep growing. These locations were VERY grateful and we understand there’s no way we would have been able to test and try to expand if we didn’t have Capital One’s support in Q4 2018.
“Ok, it’s official. I’m awake.” After looking into things a bit closer, we received confirmation that they donated money to cover the shipping costs since they knew they made so many cards. It’s above and beyond in so many ways. A dream come true, but unlike in the beginning of the blog post, we’re believing that everyone’s awake and this is REALLY happening. The Capital One team has made time to work together to uplift the spirits of the children we connect with. It’s clear they’re not simply a company dedicated to promoting their cafés and credit cards, but Capital One has been INVESTING FOR GOOD causes.