Skip to content
Here we go again! More 100% openness and honesty! When Cardz for Kidz! originally started, we weren’t expecting there to be a website and/or for us to have actual Cardz for Kidz!  email addresses (e.g. info@cardzforkidz.org). Not sure who has it, but originally, we wanted our standard email address to be cardzforkidz@gmail.com. Unfortunately that was already taken so we made it makecardzforkidz@gmail.com. In order to stay up to date on all the social activity we linked that account to our personal email addresses. Now here’s where the honesty comes in. At times, we think we’re personally cool based on our Twitter activity, but actually, A LOT of that activity is for Cardz for Kidz!and is sparked by Elizabeth Pittelkow.
Since we’re visual people too, here are some examples:

Yes, there were some notifications we received from hospitals and/or other groups (Girl Scouts tweet wouldn’t fit in the screenshot). You’ll see @pittelkoweither liked, mentioned, or retweeted a tweet about us four times within a couple days.
OK, so now there are some people who are “haters” and may try to claim, “Look at the small sample size AND you know what?!?! Only a THIRD of those are Elizabeth’s tweets!! PLUS that screenshot doesn’t include a bunch of tweets from @GirlScoutsthat you can’t see!!” Yes that’s true, but let’s not forget that she’s contributed to Cardz for Kidz!in many ways! Here’s an example: 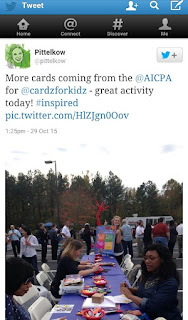 Elizabeth helped spark and retain our connection with AICPA. Sorry “haters”, three more of the tweets from our screenshot were sparked by an AICPA tweet. This was on one of their cards:
Q) What does a nosey pepper do?
A) Gets jalapeno business!
So by adding those tweets were at approximately 50% of the tweets in the prior screenshot.  If AICPA wasn’t enough, we have the entire blog post and verb for Arrowstreamand Elizabeth was a big part of that group too. 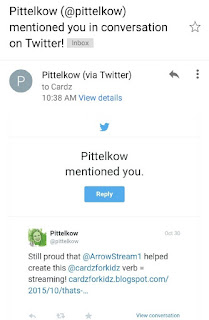