Skip to content
Now that the Secret’s Out, I’m going to share these next two blogs in first person – Ike Nwankwo. These two posts will explain what I know Cardz for Kidz! is doing, as well as some potential impacts. Don’t worry, third party will return soon! J
Heroes. Brave. Strong. Smart | Criminal. Corrupt. Racist | Caring. Artistic….
We were trying to think of some words that people often use to describe police officers. Growing up in Ann Arbor, MI and thanks to Officer Ehnis and my D.A.R.E. class, my impression of police officers would be described with the first four words. On top of that, one of our long time family friends was a police officer as well. They were my personal heroes.
A couple years ago I moved away from Chicago back to Michigan for a job. Although I’m back in Chicago (the big C) all the time due to the little c’s (clients, condo, cardz for kidz, comrades), I still only get little glimpses of what’s taking place in the city that I love. Unfortunately, a couple of those glimpses have been pretty negative recently. I saw clips in the news about officers who shot and killed unarmed black men in the city. Although it took place years ago, from what I understand the video was just released. I don’t have all the details on those stories so I don’t know for sure what happened, but I do know those images were pretty shocking. Also, the coverage of police brutality is more frequent in the news and is continually growing across the country. With all of that going on, there are several people who agree with the middle three words or phrases.
However, in amidst of all this, there are some officers making a positive impact. Now, something I know for sure….some officers can best be described by the last two adjectives; Caring and Artistic. And this gentleman from Michigan is not simply claiming those aspects based on news story, but due to my personal experience with officers and Cardz for Kidz!.
We chatted about it during some prior posts, but Q4 2015 was a record setting quarter! Thanks to groups such as Lycee Francais de Chicago, AICPA, Morningstar, DePaul University, and QuickenLoans, we received a total of 2,498 cards. If you do the math that’s like receiving over 25 cards a day! As you can imagine the stakes were up real high in order to get into the coveted Top 10. Thankfully this quarter we were able to connect with the OFFICIAL judge and she worked with her husband to narrow down the 100 or so final cards to 10. There were discussions about which Minion cards they should keep. How many cards one specific artists should have. If they should limit the amount of animal cards. But one thing that wasn’t discussed was the super hero card that was made by the Lynwood Police Department.

“You’re much stronger than you think you are. Remember that bravery is not the lack of fear. But the ability to move forward in spite of fear. The brave men and women of the Lynwood Police Department stand beside you and your bravery. Be Brave.”
As soon as she saw the card, our official judge immediately moved it to her “keep” pile–bypassing even the “Let me get Ken’s opinion/perspective” pile. And as you can see with the Top 10, Q4 2015 was the perfect combination of quality and quantity. 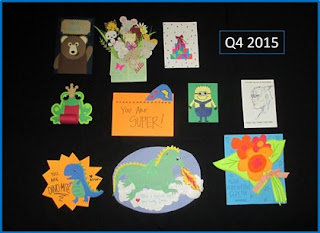 From what we were told by the police department, one gentleman was the artist behind the Captain America image on the front. Then they all worked together and made sure everyone signed the inside of the card, before placing a picture of the whole force inside, too.
As if that wasn’t enough, they did even more: the department came to Lurie Children’s Hospital and interacted with patients! You’d be surprised how hard it is to get a hold of the top artists AND get them to come to Lurie to deliver their cards during a Cardz WITH Kidz! event. (Seemed like in Q4 2015 it was a bit more difficult… We could not get a hold of our contact at the company that had 4 of the Top 10 cards. Another one of the artists stated that the weekend didn’t work for them. Thinking back, maybe we should have expected people might to be too busy on Valentine’s Day rather than simply thinking of coming to make cards! J)
We reached out a couple different ways and were thankfully able to get a hold of Deputy Chief Terrence Shubert. He then connected us to Josh Watson, the artists who drew the Captain America image on the front. They both agreed to drive to Chicago on Sunday, February 14, to personally come uplift the spirits of children and families who could not leave the hospital on Valentine’s Day. 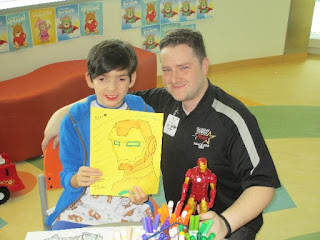 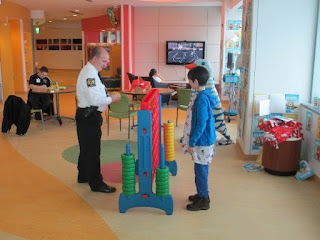 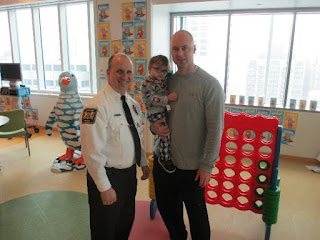 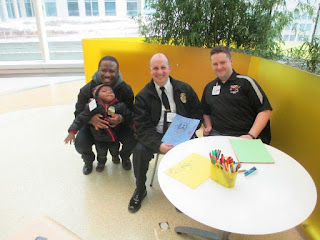 Similar to every stereotype and proclamation, I can’t say ALL officers are the last two adjectives: Caring. Artistic. However, I can say that I’m thankful I got to meet TODAY’S HEROS and work with some officers in the Lynwood Police Department who definitely are caring and very artistic! 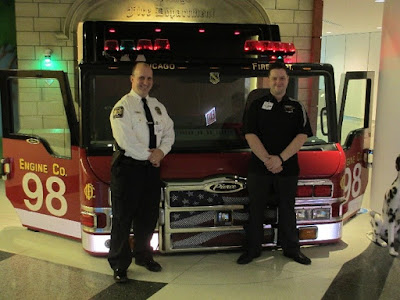