Skip to content
Be honest — What do you think when you hear these types of comments?
Often, these comments are used to focus on their inside attributes. But let’s be honest — haven’t you seen a couple where you were a bit surprised that they were together? What happens though, when you talk to the two of them? They tend to describe their natural connection. Their connection on the inside.
Now we’re not talking about true love here, but we have to agree that it’s what’s on the inside of the card that’s most important. That’s one of the reasons why we created a poll and asked for people to vote for their favorite 3 cards overall. We always make sure to include a picture of the outside and the inside of the card. In addition, we include text showing exactly what the artist wrote on their card since that’s equally important.
We believe in this so much that we actually created an entire album on Facebook and post examples of cards with amazing messages weekly. We know the start of the week is often tough, so we titled it our #MondayMotivationalbum. 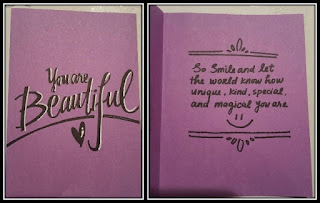 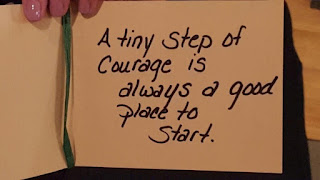 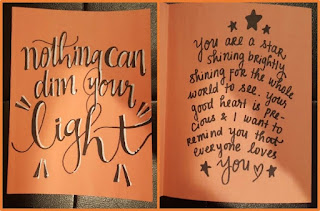 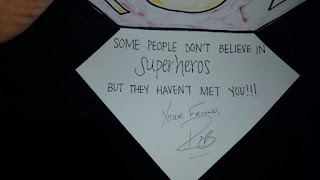 If you look at the albumon Facebook you can see all kinds of beautiful, encouraging quotes.
Then there’s the story about one of our founder’s most memorable moments. It happened years ago when he was handing out cards at Lurie Children’s Hospital. He actually had his coworkers make the cards that he delivered that day. He looked over their artwork and judged which cards came from the creative department, compared to others that were from accounting or less artistic groups. While handing the cards out, he would try to explain to the kids why some of the cards didn’t look as good as others, how the company was big, how some people were operations, and how… Then out of nowhere he was interrupted by one boy who opened up his card. The child said, “I can tell he tried really hard.” Definitely one of the most touching moments he has ever experienced! A little goes a long way.
While it’s often the beautiful picture on the outside that gathers the judges’ initial attention when they pick the quarterly Top 10, we know that if you want to impact the entire family, it’s WHAT’S ON THE INSIDE that really counts. An uplifting message on the inside, along with a creative outside, will go a long way!
#whatsontheinside #upliftingspirits
To see more pictures and stories, please check out our website www.cardzforkidz.org; like us on Facebook; follow us on Twitter and Instagram; visit our Google+ or LinkedIn pages! Also, check out some of our videos on YouTube!
Premium WordPress Themes Download
Download Premium WordPress Themes Free
Free Download WordPress Themes
Premium WordPress Themes Download
online free course
download lenevo firmware
Download WordPress Themes Free
free download udemy course