This is 100% more difficult than the last blog post Secret’s Out where I blew my cover, but here we go….

“I’M BREATHING…SO I CAN’T COMPLAIN.”
If you ever chat with someone who knows me, you can simply ask them to finish the sentence: “I’m breathing…”

A friend attempting to quote me, then corrected by another friend! 🙂 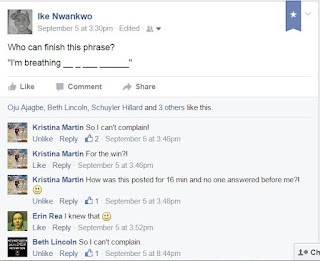 Whenever anyone asks, “Hey, how are you?” my response is always, “I’m breathing so I can’t complain.” But the full version of this phrase is: “I’M BREATHING, I’m able to say it, I remember to say it, and it’s true SO no matter what else is going on I CAN’T COMPLAIN”. That was sparked by my whole brain ordeal in 2004-2005.
Here’s some background: On July 12th, 2004, (yes, I still have the date memorized) I was rushed to the ER, which was subsequently just a couple of months after being accepted into the Ross School of Business at the University of Michigan. Of course, I don’t remember exactly what happened, but I was told that there were some issues with my brain and I needed to do a lot of testing. After the first set of tests I was told I had a brain tumor, but after the next set it was downgraded to scar tissue that was causing me to have 15+ “pre-seizures” a day. Fast forward to the Left Selective Amygdalohippocampectomy, or better known as brain surgery. The actual removal portion of the surgery took place on August 5, 2005. I was admitted to the University of Michigan’s hospital about a week before the second part of the procedure. And from what I was told/read about I was the LIFE (no pun intended) of the “party”. Since the surgery was occurring in the same city I grew up in and after I completed two more years at the University of Michigan, I knew a lot of people in Ann Arbor. And a LOT of people came to visit me. In order to make sure I remembered all of my visitors, I asked everyone to sign a blanket the child life department at Mott hospital donated (for the prior 6 summers I had volunteered at the children’s hospital, so the entire child life department came down during lunch). 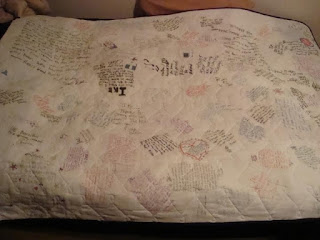 Based on some of the comments, I knew we were having a good time! Val even noted, “It was a pleasure to see you. You made it fun!” On top of the friends stopping in, my whole family was there for the pre-surgery portion, as well as the second phase of the surgery. 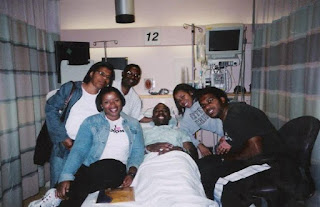 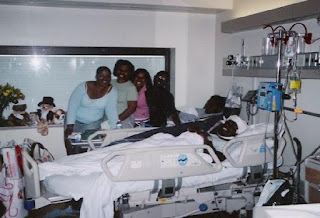 Yeah, I know, I’ll lose some man points, but I still have the bear with the white strip next to the flowers (aka Cuz) in the picture on the right in my apartment to this day! 🙂
Then, if that wasn’t enough, my brother even made me some homemade cards. #Cardzfor20YearOldSiblingz 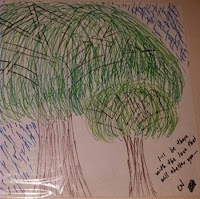 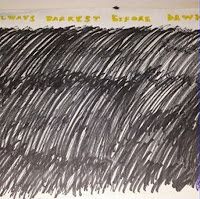 For the most part, during the actual surgery dates (7/26/05 – 8/5/05) things were well.
So, with all the smiles and happy messages, the surgery was easy, right? The removal part was a piece of cake, but the hardest part was well before that. One of the pre-surgery tests that I had to go through as an in-patient was called an Electroencephalogram (EEG). As always, my family did their absolute best to be there throughout the entire test. Since it was during the work week there were a couple of brief times when I was there by myself.
Unfortunately, I heard some of the scariest news when I was alone. Now if they, Lawrence (my neurologist) and D.S. (my neurosurgeon), weren’t my buddies I would have sworn they were evil and did it on purpose! With Lawrence, aka Dr. Hudson, to this day I still have his office number memorized. Last time I called I had a fun chat with his former admin. She remembered me from the non-stop calls prior to the surgery. Also, as you can see by the pics below, D.S. is my buddy as well. He came to my college graduation party – two years after the surgery – and we’re still connected at least via Facebook. 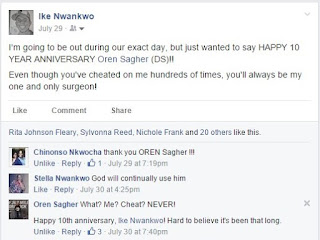 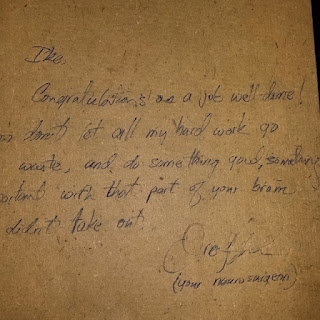 Post in Grad Book: “Congratulation on a job well done! Now don’t let all my hard work go to waste, and do something good, something important with that part of your brain I didn’t take out.” I’m trying DS! 🙂
Now back to the EEG. There were a few brief moments when I was by myself and that just so happened to be when my buddies Lawrence and DS stopped in to provide updates and potential long-term side effects. It was a tough time, so I don’t remember the exact order and who said what, but I’ll make an estimate.
First, Lawrence and some residents stopped by my room. During the discussion he told me how we were trying to be careful and needed to know exactly what was happening and where. I was updated that if the procedure didn’t go correctly that I may not be able to speak anymore. After he left, fighting tears (and losing badly), I called my mom, left her a message, then tried calling my best friend and left a message. Both times saying, “I just wanted to say I love you in case I’m not able to speak again.”
Then a little later, DS came to check in. After a brief discussion he told me how he’d be safe since there’s a possibility that the procedure could destroy my short-term memory. After he left, and once again losing the battle, I called my brother, left a message, then called my best friend again and left a message. Both times saying, “I love you in case I’m not able to remember you or how to say it in the future.”
After some of those appointments my family got together and told the doctors since the side effects were so dangerous that we wouldn’t go through with the procedure. The doctors updated us that if we didn’t go through with it, the seizures could have the same impact. :'(
Looking back at it, those calls weren’t necessary. I was acting like I may never be able to speak or remember anything after that test. That was simply the testing portion of the procedure. Nothing was being removed and there were definitely no potential long-term side effects for the current test. It was all the shock factor. And this was all before the 1st and 2nd time the doctors requested I fill out my will.
During some of my most disheartening times at the hospital, it would’ve been great to get up, walk away from my room and the EEG machinery that was showing me the constant pre-seizures, and just relax in the lounge or courtyard. Unfortunately, based on the testing and how I was hooked up there was no way I could leave. All I could do was sit in my room and wonder if the little bumps in the graph meant I was having another one.
Still, thinking about how broken down that 20-year-old young man was, I can’t even imagine how a 10-year-old child would act in a similar situation. I’ll bet they would’ve lost less man points! I sometimes think, what if I had a homemade card sitting next to my bed. I’m sure I would have still left those voicemails, but after I rolled over and saw the little Minion card (“You’re 1 in a Minion”) or the Teenage Mutant Ninja Turtle card (“You’re TURTLEY Awesome”), maybe I would have been able to smile. Or what if the nurses didn’t check the cards and just handed me a pink card with an Elsa joke (“Why can’t you give Elsa a balloon? Because she’ll let it go. You’re the true princess”). OK, telling a 6’4” 230lb man that he’s a princess would be a bit odd, but still, I’m sure it would take his mind of the disheartening news he just heard and possibly spark a grin.
Based on all that testing, I make sure that one of our hash tags (#EveryCardCounts) has a double meaning. Yes, we keep track of where every card is coming from and where it’s going but, in my biased opinion, what’s even more important is that your card may be delivered to a child and their family who’s just heard some dismantling news. Maybe that child is strapped to their bed and can’t go to the playroom to pick up cards or other fun games. With my experience, I GUARANTEE we’ll never forget discouraged children who may feel stranded.
Based on how everything ended (graduated with 2 degrees, working for a top research firm, started a non-profit, etc), I definitely CAN’T COMPLAIN, but I’m continually striving to find ways to uplift the spirits of kids who recently heard some heartbreaking news.
Special note to those children and their families: Together, let’s keep smiling! 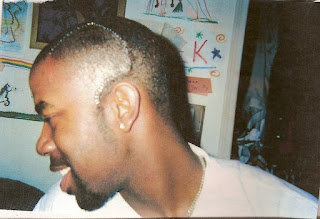 OK, I think that’s it — I did my job! As noted in last week’s post, my requirement for missing our Q3 goals was to write blog posts about my situation. All done. Now I’m going to go back to my prior belief of being behind the scenes as highlighted in the Resonate with Kids blog post, “No No! That’s our job! As mentioned in a prior post the individuals who “work” at Cardz for Kidz are able to remain behind the scenes….and that’s it – we’re the only ones.” Fingers crossed I won’t need to do anything like this after Q4!

#CantComplain #UpliftingSpirits
To see more pictures and stories please check out our website www.cardzforkidz.org, like us on Facebook page, follow us on Twitter , visit our Google+ page, or visit our LinkedIn page! Also, check out some of our videos on YouTube!
*After I was released from the hospital and saw my best friend, I got in a lot of trouble. He was mad because I didn’t leave my number or let him know how he could get a hold of me. Had too much on my mind! 🙂