Skip to content
Want to know something? Starting in Q4, we’re going to start making a promise to hospitals that we’re currently unable to fulfill. We figure that although it’s currently out of our league, we can still set our goals high and strive for success. Just a warning, you’ll start to see more links to our donation page, GoFundMe, and other ways to donate! 😊
Why NOT set our dreams high and make large promises to hospitals? For a dose of nostalgia, it was less than 6 years ago that we became a certified non-profit. But that only meant that we had the paperwork completed. Looking back to December 2012 or Q4 2012, we received 672 cards. Harley Davidson was the only group who had joined in who didn’t have a direct connection with our founder; they saw a flyer he posted in a Starbucks outside his office.
Now let’s fast forward 6 years where we’re still not spending money on advertising and our last full quarter, Q2 2018, where we received over 8,000 cards! That’s twelve times as many cards within 6 years without any paid marketing at all. In Q4 2012, we made our first shipment outside of the Midwest and also sent our first shipment to kids who were not in a hospital; we sent 235 cards to kids at Sandy Hook Elementary School. Nowadays we’ve expanded our reach across the country and have official partnerships in each continent.

Chart that shows our even breakout.
Any time we hear of a school shooting, bus accident, or anything that troubles kids, we send a shipment of cards to encourage them. Plus, we’re making special deliveries to kids in Ronald McDonald Houses and children at homes that are going through tough times. Direct to the MidWest was once 100%, but now is strictly a component of our overall participation.
Today when we’re talking to groups who are considering joining in we tell them we have participation with companies such as Google and Microsoft, as well as neighborhood Girl Scout Troops. Potential hospitals and participants are immediately impressed.
Why are we telling you all of this? Why are we telling you where we’re currently standing and how we’ve grown? It’s because this wasn’t part of the original plan back in 2010. Even when we got the certification we didn’t think we’d have some of the most renowned groups joining in and helping us evenly distribute encouraging cards to kids in each continent. None of this was planned. None of this was expected. All of this happened because we continued to pursue it.
We’re going to continue to strive for more. Our request to you is to please CHASE YOUR DREAMS. You’ll be impressed in what you can accomplish. We’re still astonished, just like we were when we got the original letter from the IRS and looked at the record breaking numbers in Q2 2018! 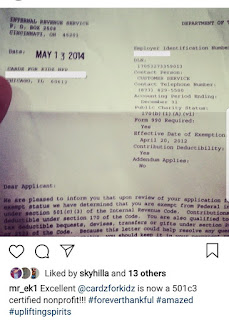