What do you think? As always, we update the Participants tab on our site on a quarterly basis. This quarter, there’s something new. For the first time, we’ll have TWO logos in our DIAMOND section! 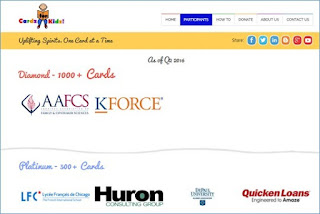 And yes, technically, there could be three logos, if DePaul University allowed us to use their overall logo rather than strictly their DePaul Alumni logo, but we’re still impressed with the two!
Now, the two up there have similarities, but also some differences. First, here’s the current breakout for the amount of cards made as of 7/1/2016:
·         Kforce – 1,138
·         AAFCS – 1,139
Here are some comparisons:
Now what do you think is MORE IMPRESSIVE, one office originally being the only group dedicated to making over 1,000 cards OR a group of people inspiring other small groups of people across the country to join in in making cards? We think both models accomplish our goal – to make more cards and uplift more spirits.
#MoreImpressive #UpliftingSpirits
To see more pictures and stories please check out our websitewww.cardzforkidz.org, like us on Facebook, follow us on Twitter and Instagram, visit our Google+ page, or visit our LinkedIn page! Also, check out some of our videos on YouTube!