Skip to content
“I can’t ever find anything my size there. I’m a 2XLT shirt and a 38×34 pants and a size 14 shoe. Too big for standard stores, but too small for the Big and Tall stores.” Sound familiar? Or are you one of the folks who has an issue with being too petite for your standard store? With clothing, things are quite specific in terms of size, but thankfully it’s not that way with participating in Cardz for Kidz!.
Something that we always say when we’re recruting new groups to join in is “groups such as Google, Capital One, and the University of Michigan have joined in to help make thousands of cards for disheartened children and seniors across the globe.” If we’re being 100% open and honest, the reason why we say those types of groups is because they’re well-known and we think other groups will be more impressed if they hear that groups with that type of brand equity are joining in and participating in this small non-profit.

While looking into it, we did some research and found this article from last year called The 10 Most Valuable Brands in the World. We were pretty impressed. First, we can’t say who exactly, but our Secret Admirer is high on that list and they’ve made over 2,000 cards. After that, the top brand is Google who has made over 550 cards. Then there’s Microsoft who has made over 30. Based on our credibility and certification, we’ve been able to partner with the #4 company on the list via Amazon Smile as well – plus we received some cards from Whole Foods who’s owned by Amazon.

Now, even with all the data that shows how we could use those companies to verify ourselves, that’s not exactly what our immediate numbers show.
In fact, if you look at our data, you’d notice that right now our number one contributors are Independent Artists. Those are people making cards in their free time all by themselves, to small book clubs or get togethers. Through 2017, these people have made over 30% more than any other group. 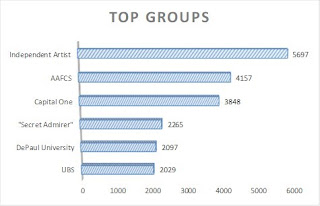 We’re getting cards from all types of independent artists, but currently that’s being led by Diane K in Ann Arbor who’s made a total of 917 cards.
Next up is an independent association – American Association of Family and Consumer Sciences. We hadn’t heard of them until they started reaching out to host events. Now they’ve made over 4,000 cards!
In summary, we’ve seen that there have been some very successful events at groups such as Google and Microsoft. We’ve also received top cards from various independent artists or other small groups. It just goes to show that ONE SIZE FITS ALL when it comes to participating with Cardz for Kidz!.
#onesizefitsall #upliftingspirits
To see more pictures and stories, please check out our website www.cardzforkidz.org; like us on Facebook; follow us on Twitter and Instagram; visit our Google+ or LinkedIn pages! Also, check out some of our videos on YouTube!