Skip to content
So, we’ve all heard the saying “Nobody’s Perfect.” Based on our recent experiences, we wanted to research that a bit more to find out if that’s true; we also wanted to make sure we understood the true meaning of the word “perfection.”
We’ve mentioned it a couple of times, but since some of the folks behind the scenes here at Cardz for Kidz! have experience and degrees in market research, we decided to do our best to perfectly research “perfection.” So, we did it all: qualitative, quantitative and then added on social data analysis. For this we held mini-focus groups (e.g., spoke to groups of people on the L and Amtrak trains & sent text messages to friends), put together a poll and, finally, searched on Twitter for “#perfection”.
When we asked the focus groups, “When you think of the word ‘PERFECT,’ what’s the first thing that comes to mind?” the main responses were: “happiness,” “flawless,” “no such thing” and “God.” Next, we used those responses to create a poll and the top choice was “flawless.” Then when we looked on Twitter, we saw some of the main tweets were about cars, family, faith and the weather. With all that in mind, it’s interesting that “no such thing” didn’t win in any of the forums, but it did trend. We had to keep that in mind.
You may wonder why we were spending so much time researching this word. It’s because we were thinking a lot like the first sentence: “No group is perfect.” Don’t get us wrong, we’ve definitely expressed our gratitude—multiple times—for groups that have far exceeded our expectations. For example, we had to say something about how our “Secret Admirer”, the University of Michigan has made a big difference, and the Huron Consulting Group has been all around creative.
In terms of making cards, “perfect” for Cardz for Kidz! would look something like this:
We’ve now worked with over 150 groups; maybe there are a few who may be able to complete these requirements. Let’s add a couple more groups to make sure it’s absolutely impossible!
Now while adding up the criteria it seems a bit challenging, but thanks to Sovos, in Q3 2017, we experienced it. Actually, they even topped that and had four (4) of the OVERALL Top 10 cards. Thankfully, they had multiple offices join in and within their first quarter of making cards produced a total of 251 cards!
We’re amazed! This group just started and immediately made an astonishing impact. Thankfully, based on the cards and pictures, it seemed like the feelings are mutual; it looks like there were a lot of smiles on all sides.
When we checked in with our main contact at Sovos, Ameerah, about how they selected Cardz for Kidz! here’s what she said:
The decision to partner with Cardz for Kidz! was an easy decision for us. To align with our culture, and our Whole Living Program, we were in pursuit of an organization that had a strong vision of giving back to the community, and allowed us to really leverage our global reach. Cardz for Kidz! was an easy selection for us as we are able to contribute cards in multiple languages, as well as allow our employees to flex their creativity and connect with the organization to brighten a child’s day.
Now, we’re hoping at least one person from Sovos will be able to represent their company when it’s time to hold the next Cardz WITH Kidz event! That wasn’t even on the list, but it would (once again) exceed our expectations and go beyond what we originally thought was impossible to achieve—marking off everything on PERFECTION’S CHECKLIST. We know we’ve been spoiled by Sovos—and we hope they will continue to host more events and take even more pictures like the ones below. 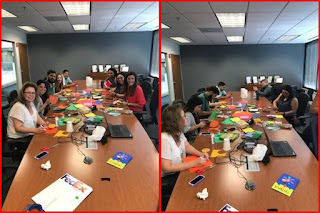 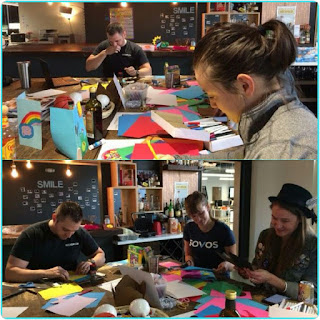 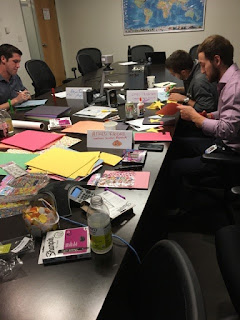