Hi, my name is Ike Nwankwo and I’ve had seizures…I have epilepsy.
Well, that was another tough admission for me. However, this one was a bit tougher than the prior blog post in which I had to blow my cover about launching Cardz for Kidz! because we’d missed some of our goals—see Secret’s Out. If you look at that post, and the next one, you’ll see that I have opened up before about my brain surgery. But when you read those two blog posts or if you happen to sense a common theme throughout anything where my personal story is the focus, I often refer to epilepsy strictly in the past tense.
I recall even after having my brain surgery, and being on a multitude of medications, that I would always tell myself that I didn’t have epilepsy. I’d always think I simply had “pre-seizures,” not the full grand mal seizures—so it’s different! With that in mind I could sympathize with—but not fully relate to—the children on the 19th floor at Ann & Robert H. Lurie Children’s Hospital of Chicago; the children Cardz for Kidz! partners with at the neurology units at Akron Children’s Hospital AND University Hospitals-Rainbow Babies & Children’s Hospital; and all the children I connect with on Instagram via hashtags such as #seizuressuck.
You might want to say, “Ike, stop lying. You’ve had a grand mal seizure AND you’ve even watched a recorded episode.” My response would simply be, “See, what had happened was…” But being 100% open and honest, here’s the story of that trip in the hospital. Due to my declining health and the fact that the meds weren’t working, my new doctors decided I needed to have an updated in-patient EEG. During that week, they took me off all my medications in order to trigger as many seizures as possible. When I’m in tough situations, my response is either to laugh or to cry. My tear glands were on strike that day, so all I could was laugh and tell jokes; thankfully, I quickly bonded with all the nurses and staff in charge of my care since we were all laughing. A bit later there was a big blank spot in my memory. Later my nurse (and “friend”) came in; she told me I “had a bad one” and then asked if I wanted to watch it. I agreed and watched myself have my first-ever grand mal seizure. On that tape I saw my mom, who was in the room, stand up and run over to me in fear. My response as I watched myself was: “See what had happened was, I wasn’t on any medications. So, I don’t have real epilepsy like the children I volunteer with.”
Honestly (and my sincerest apologies to our friends at @elijahs_fight on Instagram), I was being completely selfish and that’s why I didn’t share the picture below on the Cardz for Kidz! Instagram account. I figured since there was some concern about how my epilepsy would have impacted my previous job, I should hide my condition while searching for a new position. [Side note: I hope Elijah’s enjoying himself with the angels.] 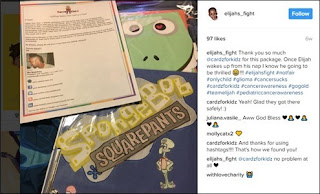 Then again, these days, there’s no room for excuses. I’m currently employed and the University of Michigan Health System plans to write a blog post about my medical condition. Still, I modified some of the Instagram posts that directly focused on my epilepsy/seizures.
Original version: 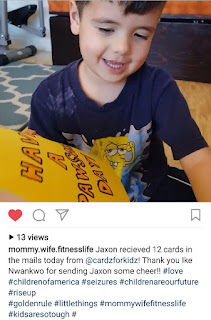 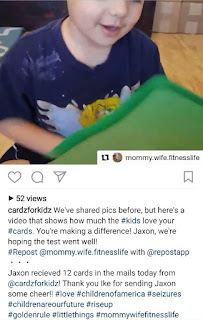 Although there are other Ike Nwankwos out there, I still felt the need to modify their words and remove my last name—due to another (earlier) post stating, “Ike Nwankwo wrote Jaxon a very special note about how he had #seizures and to stay strong!” I should be proud that it’s helping uplift children.
In light of Epilepsy Awareness Day being Sunday, March 26th, I’m going to be even more open. Being brutally honest with you, I’m definitely not thankful to have this condition; however, I’m proud that so far I’ve been able to overcome it, in addition to the progress I’ve made in all aspects of my life.
I recall back in high school I used to play football; at the end of practice, or after different games, we would huddle up and get hyped together. Being one of the varsity team’s captains, I oftentimes got to lead our chant(s). How it worked was I, or another leader, would shout “PURPLE!” and everyone else would yell “PRIDE!” That’d go back and forth, back and forth until we broke it down and celebrated together. Even though all of us with epilepsy aren’t gathered in one place, wearing the same uniform, I believe we should all still proudly proclaim “PURPLE PRIDE!” since we’re effectively overcoming this neurological disorder. My name is Ikedichi J. Nwankwo and I am proudly overcoming epilepsy!
All week long I wore purple and I’ll definitely wear purple during my volunteer shift at Ann & Robert H. Lurie Children’s Hospital of Chicago this Sunday, March 26th—in honor of Epilepsy Awareness Day. 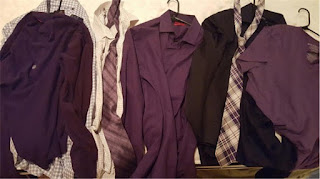 Also, if you look closely at this picture, you’ll see my love of homemade artwork and working with kids is nothing new!!! 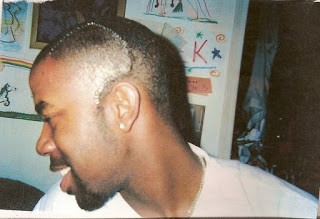 FYI – purple for epilepsy similar to pink for breast cancer.

One thought on “Purple Pride”