Skip to content
It will take A LOT for anyone to get close to DePaul University in terms of the wide variety of departments that have hosted an event. Currently, it includes special student groups, athletics, modern language departments, alumni, and more! Thinking about it, it’s no wonder they’ve made 1000+ cards (1,164 to be exact)! #EveryCardCounts
DePaul University has had an array of groups participating, but we’re also impressed by the variety of ways the University of Michigan has also joined in. Similar to how a lot of DePaul’s connections were sparked by our founders (DePaul alumni), Michigan’s contributions were led by  Dr. Katherine Burson, a marketing professor at the Ross School of Business.
Here’s some background. Did you read the post where we talked about what we wanted to become WHEN WE GROW UP? In that post, the ‘protagonist’ (aka founder of Cardz for Kidz!) described studying for exams a month after going through brain surgery. The goal of that post was to show how hard it is for students to go through difficult health conditions AND still do “well” in school. Therefore, when we grow up, we’d love it if we were able to help provide scholarships for kids who’ve gone through difficult physical conditions.
As mentioned in the post, the student was having trouble remembering a lot of the simple phrases and themes in marketing. That all took place in a Marketing 300 course that was taught by Professor Burson at the Ross School of Business. The University of Michigan had a special setup where students with disabilities got extra time on the exam. Since it was his first time going through the procedure, he didn’t reach out in time and unfortunately wasn’t able to find a time that worked with Dr. Burson to take the exam at another time. Once the exam started he began working, trying to remind himself of the 4 P’s, STP, types of targeting, etc. After a bit of frustration, he sighed popped his head up to the sky, and on his way down, he made eye contact with Dr. Burson. She motioned for him to get his stuff then come down. Turns out she found a grad student to sit with him during the beginning of the exam while she was with the other students then later came and sat with him for the extra time. One could say, her helping a student helped inspire our desire to help future college students.
Next Cardz for Kidz! has consistently been striving for ways to connect with more universities. This ranges from alumni to current students. We’re always reaching out to friends and others to see if they have ideas on what we need to do to expand. Thankfully, there was one time when we didn’t need to do that. It was real exciting/shocking when Dr. Burson reached out and told us she’d like for her students to create and present new marketing plans to us. Here are a couple quick snapshots of their PowerPoints. 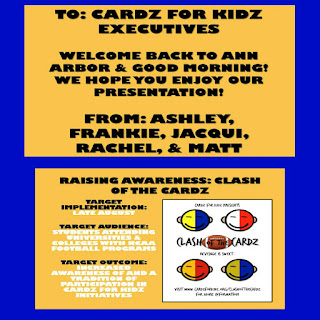 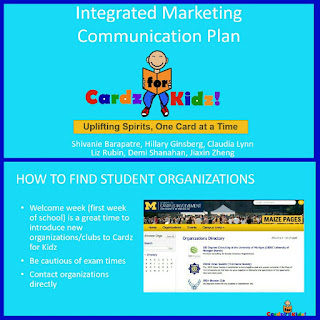 Those recommendations were used to make our next connection via Dr. Burson, Lauren Nopar, and Zeta Tau Alpha sorority. Dr. Burson connected Lauren and our founder a couple months ago to spark some networking. Lauren conveyed that Dr. Burson insisted that she check out the Cardz for Kidz! social pages and website before she reached out. Thankfully, Lauren followed her recommendations and at the end of the chat about networking, they discussed how her sorority could participate. After their first event, they created a total of 151 cards AND already scheduled a date to make their next set of cards. 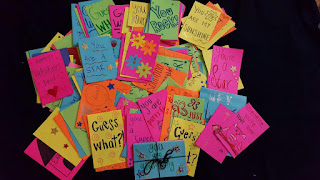 Currently, the University of Michigan, primarily thanks to Dr. Burson and the marketing department, has impacted approximately 180 patients. Although we appreciate cards and gifts from ANYWHERE and EVERYWHERE, we’re thankful we experienced THE MICHIGAN DIFFERENCE; producing cards AND creating marketing strategies. Thanks for your contributions.
#TheMichiganDifference #UpliftingSpirits
To see more pictures and stories please check out our website www.cardzforkidz.org, like us on Facebook page, follow us on Twitter , visit our Google+ page, or visit our LinkedIn page! Also, check out some of our videos on YouTube!

One thought on “The Michigan Difference”